I hope everyone had a wonderful holiday break! Lessons resume at PMAC tomorrow, though most classes and ensembles are on hiatus until February - except the new art classes! And, speaking of art, check out PMAC's first-ever Saturday workshop (one day only):

PUPPET PARTY!
Saturday, January 16th from 1 to 3 p.m. at PMAC
For Children in Grades 1 & 2 (enrollment is limited!)
Led by PMAC Visual Arts Instructor Anna Nuttall
$30 per student for this workshop plus a $5 materials fee
Enjoy a magical session of puppet-making! Join us for this FUN and unique experience “carving” FOAM to create super hand puppets! We will create your favorite animals or people, or invent your own creatures from your imagination! Dream up parrots with personality, purple polka-dotted beings from outer space, or make yourself a human-like foam friend! When finished, children will develop a personality for their puppet and we’ll let the conversations begin! Art comes to life with puppet-making!
Posted by Living Composer of the Month at 3:25 PM No comments: 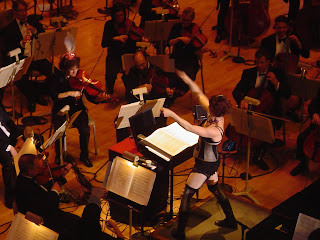 Had a great time with Adam at the Boston Pops' New Year's Eve gala bash. Unfortunately, Katie came down with a cold, so her seat was empty. :-(

Here's the setlist from Amanda's portion of the concert:

They opened her half of the concert with the U.S. Premiere of "Statuesque" a short film by Neil Gaiman (Amanda's boyfriend), starring none other than Amanda Palmer. Watch the film on YouTube here.

Then the second half (Amanda's half) of the concert began:

It was a great show, though similar in many ways to her show of June 2008. Read my blog entry about that show here.
Posted by Living Composer of the Month at 3:29 PM 1 comment:

Email ThisBlogThis!Share to TwitterShare to FacebookShare to Pinterest
Labels: Concerts

Resolutions for the New Year

I start off each year with a list of resolutions, a reminder to myself of how I would live my life in an ideal world. Just the act of writing them down often instigates action. I just read my list from last year and I like it. Read it here. This year I'm going in a different direction, with some specific actions. Though I'll still try to live up to the lofty ideals of last year's list. For 2010 I resolve to:

Posted by Living Composer of the Month at 12:49 PM No comments: