Thanks to Jerry Bowles at Sequenza21 for posting this talk by Ben Zander. Zander is a captivating speaker. A long video, but well worth watching.
Posted by Living Composer of the Month at 11:33 PM No comments:

Amanda Palmer at The Pops

Last Thursday night Katie and I took the rare opportunity to see Amanda Palmer perform in Boston with with Boston Pops. 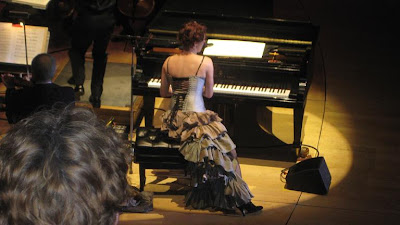 Her Set List:
Missed Me
Astronaut
The Point of It All
Cain't Say No (from Oklahoma)
Brick (Ben Folds Cover)
Strength Through MusicHad to Drive
Coin-Operated Boy
Wonderful World (with Brian Viglione) 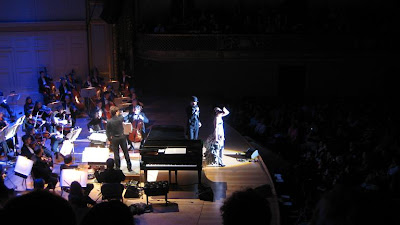 I am a big fan of Amanda. I am a big fan of The Dresden Dolls. That alone was enough for me to really enjoy this show, part of a series The Boston Pops calls its "Edgefest". It was great to hear Amanda's songs backed by the Pops orchestra. The arrangements were o.k. Not exactly how I would have written them, but they were solid. Maybe "safe" is the best word. The music of the Dresden Dolls and Palmer's solo work (both of which are mostly written by her) is adventurous, creatvie, edgy - it's too bad the orchestration didn't live up to that. A lot of effort was put into the opener, "Missed Me", with a percussionist on tambourine and a violinist following Amanda as she weaved through the audience, and a trombone player leaning over the lower balcony playing to her. It was a great opener, as theatrical as you'd expect from Ms. Palmer. A few of the tunes - "Astronaut" and "The Point of it All" were beautiful with the string underscoring. And, as is always the case, Amanda looked as if she were having the time of her life. 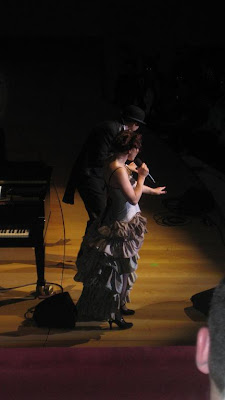 Katie and I took these pictures from our great seats, in the first balcony overlooking the stage. 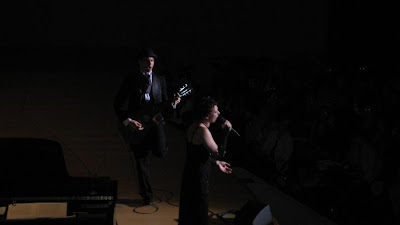 Afterwards, the Luminescent Orchestrii performed in one of Symphony Hall's function rooms. Let by Sxip Shirey, a friend of Amanda's, this hip NYC group puts a unique spin on eastern European folk music. It was a great night. 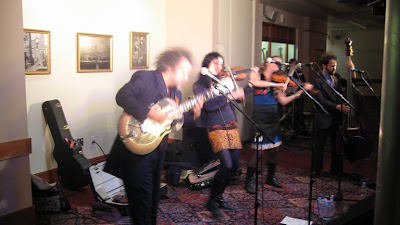 Posted by Living Composer of the Month at 12:18 PM No comments:

Though I'm not the most consistent of bloggers, I do realize the relevance and importance of blogs in todays business world. And that point was hit home today by our guest speaker at the Portsmouth Rotary Club, of which I am a member. KD Paine, marketing guru, blogger and writer, spoke about blogs at today's lunch meeting, and it is more evident than ever that blogs are a force to be reckoned with. But what hit home with me was the impact Twitter is having on the internet world. I've known about Twitter for some time now, but not really paid much attention. Now I feel an urgency to check it out, get my own Twitter account.

And I need to be better about blogging.

Check out KD Paine's blog here.
Posted by Living Composer of the Month at 4:28 PM No comments:

What's the deal with our government paying $40 a pop in certificates for people to buy digital converter boxes for their television sets. Read below from a recent AP article:

"The government established a $1.5 billion coupon program to help millions of consumers buy the converter boxes before the nationwide transition to digital programming in February. Households are eligible for two $40 coupons, which are aimed primarily at up to 21 million owners of the older-model sets that rely on antennas to watch TV. If they don't get a converter box when the country's broadcasters complete the switchover, they will wind up staring at a blank screen. Cable and satellite TV subscribers do not need the boxes."

O.K. I don't get it. Is TV really that important that the government needs to step in and give people who haven't bought a new set in over 20 YEARS a $40 certificate so they don't have to upgrade? Can't there be some reasonable restriction on this - like only for the elderly and those with a note from their doctor? COME ON! I can think of SO MANY other ways to spend $1.5 BILLION of our money.

Posted by Living Composer of the Month at 7:14 AM No comments:

A guitar student who is graduating this month and heading to college to study music in the fall just played an original composition, written by his mother, on his studio recital. His mother has only been playing for a year, having begun guitar as a birthday present to herself. She wrote the piece for our adult student blues band, which premiered it just three weeks ago. His version is very clearly the same piece, but unique in it's arrangement just the same.

Very cool...and one of the many reasons I love my job.
Posted by Living Composer of the Month at 3:55 PM No comments:

Katie and I, with Anna and Chris, attended opening night for the second True Colors Tour in Boston on Saturday. The lineup was:

OK - we FINALLY were able to see Regina Spektor live in concert. For those who don't know that story, read more in the postlude of the blog post here.

Regina was the highlight of the evening for us, though the festival atmosphere made her performance challenging. She was on early in the evening and there was a lot of milling around and talking by audience members who were obviously there for the later part of the show and weren't too hot on the three opening acts.

Not much to say about Kat Deluna - she has an OK voice, but I'm not into karioke hip-hop performances.

The Clicks were loud, and fun. Not terribly original.

Rosie O'Donnell was surprisingly good. I expected to be preached at about politics, but no, not a word on that front. It was a touching monologue about coming to terms with living longer than her mother, who died at 41 of cancer when she was only 11. And about seeing her kids grow older and being able to be there for them at times when her mother wasn't. A very soul-searching set.

The B-52s really are the world's greatest party band, and with them the party got started. Mostly new tunes of their latest album - Funplex - but they did perform classics "Roam", "Private Idaho", "Love Shack", and "Rock Lobster".

Cyndi Lauper was high maintenance on stage again this year. (Last year she complained - rightfully so - to the sound engineer the entire concert. This year's victim was the lighting guy. Last year she came off as a frustrated artist in a bad sound situation. This year it was more pain-in-the-rear-diva.) She has a remarkable number of hit tunes.

All in all a fun night, though it will take a great penultimate group to get us back next year. For the last two years we attended to see an opener - The Dresden Dolls last year and Regina Spektor this year. But we've learned that it is not the best opportunity to see these great young opening bands. They get little respect from the audience and their sets are cut way to short by the time constraints of the festival. It was great to hear the B-52s, so if the band in their slot is someone we want to see, we might go again. But 2 years in a row of Cyndi Lauper is plenty for a lifetime.

To read about last year's concert, go here.
Posted by Living Composer of the Month at 7:24 AM No comments: